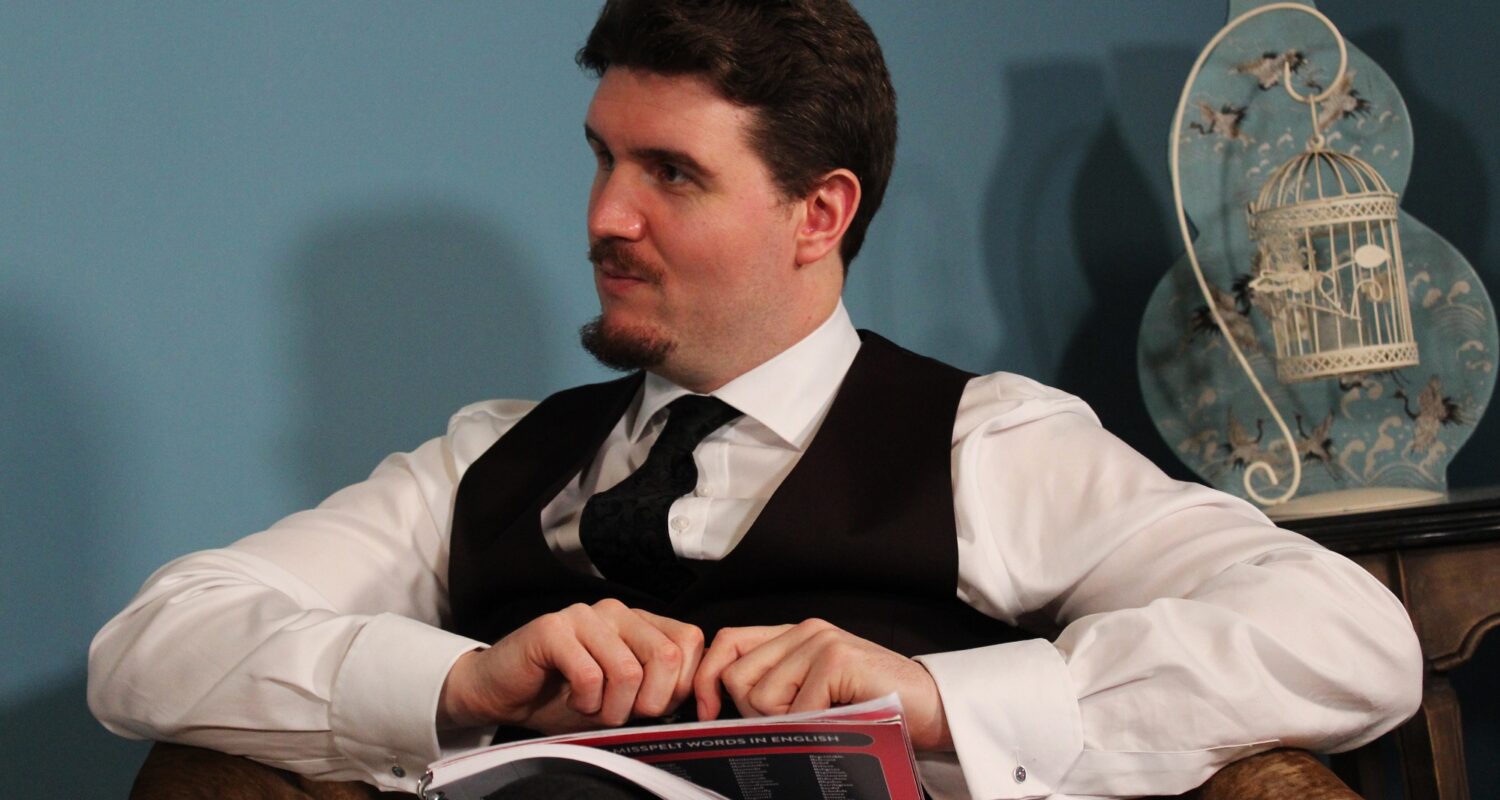 Otherwise known as my Author End-of-Year Newsletter. Bringing 2022 to a close with some updates from the professional life.

First of all, hello! I realise I’ve been on a bit of a hiatus from the website. For several reasons, 2022 has been a bit of a rollercoaster of a year, in both my personal and professional lives, for good and ill. There have been battles with my ongoing latest novel, a podcast to work on… I’ll go into that in a bit more detail now.

You can STILL hear Chopin from the attic

My current project, a World War II novel set in a hotel in Berlin, is still very much in the works. The readers I’ve spoken to throughout 2022 have all told me how much they’re looking forward to this or how they’re excited to read it. But it’s been a bumpy ride with the writing process. Call it the artistic temperament, call it self-doubt, or whatever else. Shortly after surpassing 100,000 words, I decided I was fed up of the constant series of back-and-forths through doors and into rooms that my characters were taking. In short, it was getting a bit dull to write, and I didn’t feel like it was going anywhere. And so I made the insane decision to start from scratch at that point.

However, after I’d started the re-draft, I discovered I wasn’t actually doing anything different from the last time. And then I read a few posts from fellow authors reminding me that, when it comes to the first draft, you should just get it down on paper. Leave it to the editing process to wheedle out anything you don’t like, to catch out anything a bit lame or boring and do something about it then.

And so with that in mind, we picked up where we left off. You Can Hear Chopin edges steadily towards its halfway mark. So could 2023 be the year we see a finished draft at the end? It’s possible…

If you’re totally unfamiliar with the novel, why not catch up with the story so far?

Of all my projects this year, I’m probably proudest of the second season of my podcast, The Dale Hurst Writing Show. When I launched it last year, I only had it in mind to be for a bit of fun. Just to talk about writing and storytelling with a few likeminded individuals.

In 2022, something felt different. I’ve had people find me on LinkedIn and tell me how much they’re enjoying it. Authors have messaged me on Instagram, asking me if they can feature on an episode. PR reps have emailed me inviting their clients onto the show. While our listenership is still fairly small, we are seeing some definite growth, with key audiences not only in the UK but also the USA and Canada.

At the end of the first series, I put it out to my followers to decide if they wanted to see a new season. This time around, I didn’t bother. I know there will be a Season 3 in 2023. Plans are already in place and I can’t wait to get stuck in.

The Dale Hurst Writing Show is now available to listen on Spotify and Google Podcasts.

One of my 2022 New Year Resolutions was to enter at least one writing competition per month. And unlike most of my New Year Resolutions, I actually kept it up for seven months of the year! As usual, these entries proved mostly fruitless. Mostly, not totally.

Earlier in the year, I received confirmation that a short story I’d written – a surreal tale called Sunday on the Boulevard with my pet lobster – would be published in not one, but two anthologies by Fresher Press. But even more fantastic news; the story had been longlisted for the Bournemouth Writing Prize (also run by Fresher and Bournemouth University). It may not have won or even made the shortlist, but I still regard it as a professional victory. Especially when my reading of the story was so well-received at the anthology launch event in November.

In other news, I joined the award-winning marketing team at Arts University Bournemouth earlier this year. Providing me an outlet for both creative and administrative talents. But also an academic setting that’ll hopefully prompt me to start looking into a Ph.D. properly, as I plan to enter the world of lecturing and research if I can manage it. Within the fields of Creative Writing and/or English Literature, of course.

What else could be on the cards? A play? A film? …I should be so lucky to have the time!

How do you turn your first drafts into passable prose? Watching out for writing rules that, no matter how hard you protest, you really shouldn’t break if you can help it. And when you’re first starting out, you may not be able to help it at all…

I’m going to come out and say it from the off: your first book will probably not be very good. That is, the first ever story you put fingers to keyboard over. Because, for the most part, this is untamed, uncured material, in which you’ve probably broken a load of laws and rules of the art. And that is totally fine; it’s part of the process. I have defied a number of writing rules myself; sometimes knowingly, other times, not so much. Indeed, even now, there are a fair few things I’d like to change about the work that I’ve since published.

I have always clashed with people who are quick to tear a first draft to shreds, as if it’s meant to be perfect first time around. The maxim I follow for the first draft process is: write with your heart, not your head. Get the story down on the page, and sort it out properly in the re-drafting process. I’ve often found those who don’t do it this way often kill their stories off before they’ve given it a proper chance.

All the same, it never hurts to alert you to some of the common, important writing rules that you may break even without meaning to. I have pinpointed five for the purposes of this article:

Exposition is one of the chief elements of narrative. To give readers information necessary to understanding the characters and the story. However, especially in today’s literature, it ought to be given in moderation. Allow your readers to work more stuff out for themselves than just handing it to them on a platter (which we’ll discuss more further down). Massive blocks of backstory and description can put the modern reader off. There’s not much sense in delivering a lengthy chapter about the main character’s family history if there’s nothing really relevant in it. And if it is crucial to the story, think of another way to deliver the information. Spread it out across a number of smaller scenes, maybe via dialogue or action, for example.

I have highlighted the use of adverbs on this blog before. There are occasions in which to use them is acceptable. If you’re describing the way a character has said something, but there is no specific verb of its own to illustrate it properly, then you have little choice. This is one of the writing rules I have tended to break continually (see — I just did it again). It is a crutch on which writers can lean on in the course of their drafting process. You can always find more interesting verbs or stronger ways to describe speech and action when it comes to editing.

Prior to doing my Masters in Creative Writing, I used to think the Show, Don’t Tell rule was another one of those pretentious rules that reading addicts created and posted on the Internet to justify why they didn’t like something they read. It turns out this is actually the accepted approach in modern writing. Rather than tell your readers something or other about a character, make them do or say something in order for your readers to analyse it and come to the conclusion themselves. It creates new challenges for you as a writer, but also may open up new avenues in terms of narrative. Your story may go in a different direction to what you had planned.

Another one I’m guilty of. And while I don’t justify it, I will say, when you read a lot of 18th and 19th century literature, as I do, there are a lot of scenes in which the character whose point-of-view you’re following changes. Sometimes for no significant reason. I’m currently reading Dostoyevsky’s Crime & Punishment, and I can tell you it happens quite often in that book. At times, it’s a minor, background character, whose perspective we view for a matter of sentences, for no especial reason. Because I was given to understand this as a bad habit, these days, I make sure I have designated a focaliser (or focalisers) for each chapter, and, when I make the switch, I make sure it’s as significant as a chapter break, so that the reader can follow it. Fans of the A Song of Ice and Fire books will know that George R.R. Martin takes it one step further and names the Point-of-View character for each chapter.

In short, try to follow one character’s perspective in a chapter. And if you must have more than one POV, make the switch make sense. When you come to read through your work, you’ll find you may have changed the focaliser without even realising. It’s something to watch out for.

This calls back to the first point about Fact Dumping. Many of my readers have commended me on my skills in descriptive writing. And it’s true, I do like a rich description for my characters and settings. But even I look back on The Berylford Scandals and recognise that I spent far too long in the opening chapters talking about how the Stirkwhistles looked and acted, instead of letting the narrative do that for me. So, in learning my lesson, for You Can Hear Chopin from the Attic, the characteristics and idiosyncrasies of the characters get revealed more gradually as the story goes on. Meanwhile, the initial descriptions are more to-the-point and (hopefully) don’t give too much away. I advise other writers to observe a similar approach. No one needs three adjectives per body part and item of clothing. If you must describe all this from the off, make sure it’s worth the reader’s effort. Otherwise you’re just going to bore them.

WHAT OTHER WRITING RULES ARE OUT THERE?

Do you know any other rules or laws of writing that get broken, even by total accident? Let me know your pet peeves in the comments section.