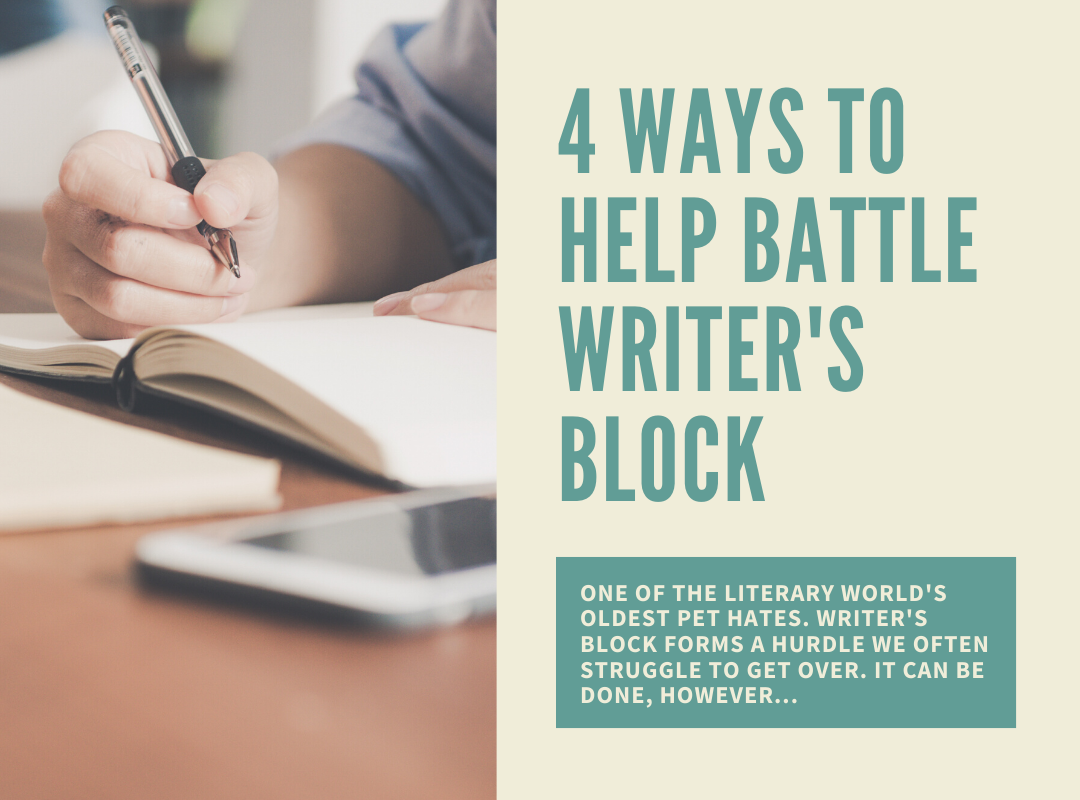 One of the literary world’s oldest pet hates. Writer’s Block forms a hurdle we often struggle to get over. It can be done, however. I suggest a few ways how…

I want to address an issue that affects all of us, whether we’re jobbing authors, amateurs, or people trying to start out. Namely, the condition known as writer’s block. It can render us completely unproductive for weeks, months, years in some cases. I myself am a repeat sufferer; it can be very frustrating when you do actually want to work but just can’t find the drive, the motivation, the inspiration, the mood… the words. But I have found that there are a few things you can do to get past it.

The first thing to do when the words for your own work aren’t quite flowing is to read. Reading is something you ought to be doing anyway; it can equip you with vocabulary, a familiarity with the style and form of literature. I tend to find it helps to read work that is similar in style or genre to what you’re working on – maybe even by an author who inspires you. And this extends into battling writer’s block. I know during my most recent spell earlier in the year, I wasn’t really reading anything similar to You Can Hear Chopin, my current work in progress. And then I started reading Alone in Berlin by Hans Fallada, and steadily, after absorbing the environment and the tone of that novel, I began to sort of piece it together in my mind of how I could inject that influence into my own writing at the point of the story that I had reached at that time.

For people who are more visual consumers, I would say it’s not unacceptable to watch films or series, if you find them more inspiring. When writing the Berylford books, I often had a Dickens or Austen adaptation on in the background and that would urge me along.

I recommend this a lot for people who want to get into writing but are not sure where to start. It is also great for writer’s block. If you hit a road bump in your story where you think, “Meh, I don’t really know where to go from here,” or you just lose your flow and can’t get it back again, my suggestion to you is to take a step away from the current project.

Start a new document and just write whatever comes into your mind. Just type. Whether it’s about your day, or another story idea you’ve been sitting on for ages. I do find that when you have several ideas that you want to work on at the same time, it does rob you of the motivation to focus on your current piece of work. Set yourself a time limit, whether that’s five, ten, whatever minutes of just writing, and then come to a stop. You can obviously get rid of anything you don’t like; keep anything you do. It might not work first time, but this idea of free writing might push you back in the right direction to finish your work.

Lately, I have been working on You Can Hear Chopin in my free time while at work. Just five- or ten-minute bursts. But I’ve been writing it all down by hand in a notepad. And then when I get home, I re-type it from there, and often edit myself as I go, so it’s almost like proof-reading a first draft in the process. I think because the act of writing by hand is actually relaxing to the brain that it feels much more natural, a much smoother process. I often find if I’m struggling to get something out on the screen that getting it down on paper with a pen really does help.

You may have heard people have their best ideas while in the shower or while chopping vegetables or suchlike. And there is some truth in that. The creative juices tend to flow during monotonous, everyday tasks, when your mind can wander. Referring back to my last point, I started trying to work on my book at work. That’s because what I do is so repetitive, it is activating the creative part of my brain to work on You Can Hear Chopin as soon as I can. I can’t leave it until I get home from work. I discovered this early on. Doing the job I do, I’d be all inspired by lunchtime and think, “Yep, I’m going to do some writing when I get home,” but when I got there, I’d be like, “Nah, too tired now”. In short, do your monotonous task, get thinking about whatever you’re writing, and, if you feel inspired, act on it as soon as possible. Don’t give that creativity a chance to turn off again.

Behind the Writing: “A Modern Wasteland” (Part IV)

One more time now — looking behind the writing at the poem I wrote most recently: A Modern Wasteland…

It has honestly been such fun exploring this poem these last few weeks. Definitely going to try to do more poetry, in and around my other writing projects, in the future. But for now, let’s finish off with A Modern Wasteland‘s fourth and final chapter. Titled with my personal favourite line of the four used from The Sermon on the Mount: …AND TURN AGAIN AND REND YOU.

IV. AND TURN AGAIN AND REND YOU

To my little estate I now retire

My sitting-room, my settee

Supine upon this couch I now expire

And muse on how I got here.

They all tell me not to dwell on past failures.

Impossible when all you see around you,

The endless visits from the Duvaliers,

The cards and biscuits – they’re all that’s left

Meanwhile, she’s out there somewhere – the victor with the spoils.

Her crimes were more on par with those of Marion Crane

Than with those of Lady Dedlock.

And yet ‘twas I who was dubbed profane.

A spectral voice inquires, “Could you forgive her?”

“Forgive her? Forgive me!” I realise I’m being an disgracious host.

“Has anyone offered you tea?”

They sit and stare – have I become the ghost?

And thus on reality I have an ever-loosening hold,

Lost in this mire of melancholy.

I resolve to sit here in my turban,

My monocle and my cigarette in a holder

And languish here for years uncertain

It was here that I was really inspired to expand upon the whole poem and turn it into a prose narrative. Oddly enough, the only line where I had to cop out — for lack of a rhyme for “failures” — sealed the deal. That will hopefully settle any queries that anyone has about what I meant by “the Duvaliers”. When I eventually get around to turning the whole Modern Wasteland into a prose piece, the Duvaliers will serve as supporting characters, as will Sir Jack and Mr Gibson (named after two of my best friends – just the latest in a series of allusions I like to include).

Who can pick out the cultural references in this stanza? And what they might mean? Well, for those still unsure, it’s a comparison between Marion Crane, from Robert Bloch’s Psycho (or more specifically Alfred Hitchcock’s adaptation thereof where she was played by Janet Leigh), and Lady Honoria Dedlock from Dickens’ Bleak House. Last week, you saw the narrator decide to let go of his failing marriage. Now we learn that, rather than sleep with men she wasn’t married to (as Lady Dedlock did), she embezzled money, as Crane did. Now riddled with grief and almost catatonic with depression, our narrator falls in and out of full consciousness, only partly aware of the visitors who show him support.

And that’s that! Thank you all as ever for your support. More updates and side-projects to come in the new year.