5 Things You Need Before Starting Your First Novel 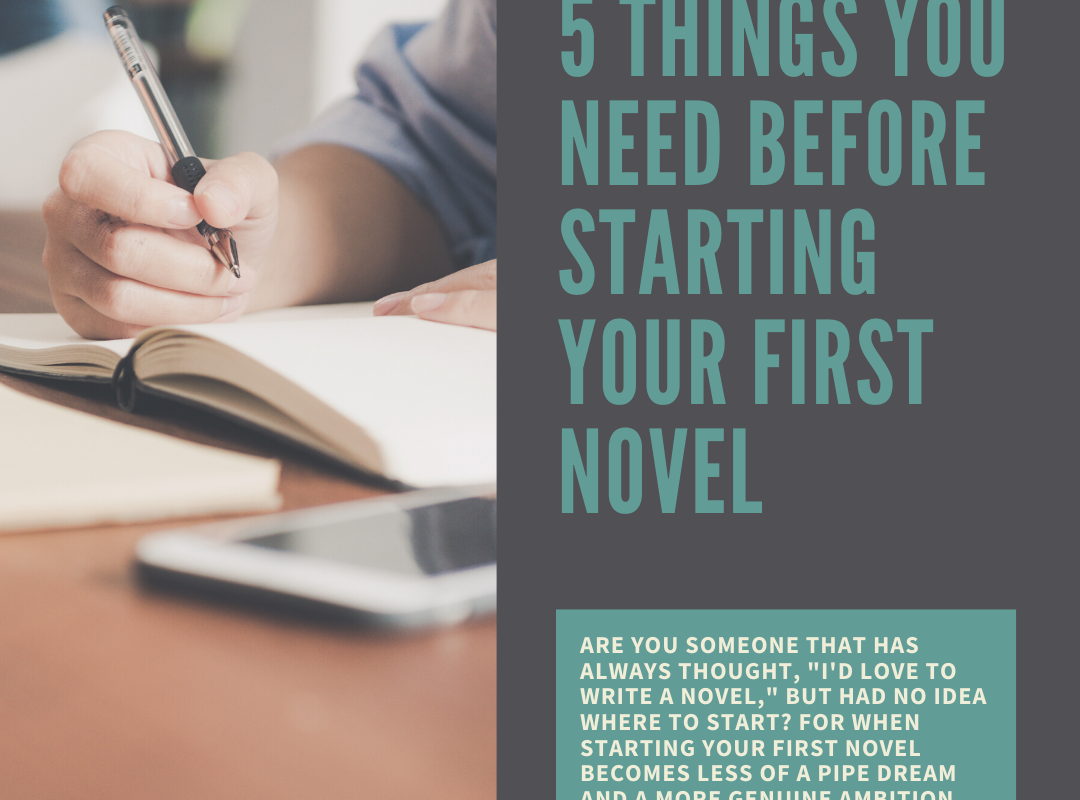 Are you someone that has always thought, “I’d love to write a novel,” but had no idea where to start? When starting your first novel becomes less of a pipe dream and a more genuine ambition, refer to this list first…

Starting your first novel is a massive feat. That’s starting it; say nothing of finishing it! Over the course of my short life thus far, I’ve encountered a number of people who have told me they would love to write a book, but no idea where to start. And then there’s a select few that have begun, got to a certain point and given up. Or indeed, an even smaller number who have produced first drafts and then done nothing with them.

This post is addressed to those who need a bit of guidance before starting to get serious. Becoming a writer is not just an ambition; it’s something of a lifestyle choice too. So here are five things you will need, without question, before starting your first novel.

You think this would go without saying, really, but it beggars belief how many people expect that it takes no time at all to write a compelling story. Sure, you can chuck a load of words together in an hour and see what you come out with, but I’d consider you a prodigy if it was a fully cohesive, entertaining story with interesting plotlines and irresistible characters. Building all of those things takes time. The Berylford books took me eight and twelve years to finish, in total; that’s numerous drafts, re-drafts, editing sessions, planning sessions and more. With hours of social life sacrificed in the process.

My advice is, if you have a busy lifestyle, to reserve a regular period of your week — maybe an evening one weekday or something — in which you do nothing except work on the book. That way, it becomes a part of that lifestyle, as opposed to an intrusion on it.

I often despair at the number of aspiring and amateur authors who say they’re writing a fantasy novel. Simply because it’s such a saturated genre, it stuns me to think how they have come up with something new, that isn’t not-so-secretly “inspired” by Tolkien or George R. R. Martin.

To have a story worth publishing (assuming that’s what you want to do with it), it has to be of a decent quality, namely of considerable interest to an audience. And it should also be original, i.e. not done before or tweaked from something similar. Having inspirations and influences is fine, but the story should be your own. So, starting your first novel not only requires you to recognise what is considered a high-quality idea. You also need to have knowledge of the genre your story belongs in.

An offshoot from the first point in a way. Commitment is so important for any creative project, not just for writing. I have worked with enough non-committal people to know the annoyance when they start something, often very good, and don’t or won’t see it through to the end. I still harbour some bitterness about one or two projects that ran dry on account of the other half’s lack of commitment.

When you’re writing your first book, try to maintain the attitude that you are working on something big. An awesome achievement with potential rewards at the end of it. Because otherwise, I will say there’s probably no point in pursuing it in the first place, if you’re going to get so far and then just leave it.

Whether it’s a gripping thriller or a work of epic fantasy, you won’t get very far without research. To me, it becomes very clear very quickly when a writer has no idea what they’re writing about. And that indicates a lack of research. So having those research skills down — knowing what you need to find out and where to start looking — is of extreme importance. If you’ve read this point and thought, “I can’t be bothered with that,” or “Who has the time?” then maybe writing a book isn’t the right thing for you.

Research not only helps you construct your story and your characters, it also adds to your knowledge of literary style and form.

No one likes a copycat or a wannabe. As I said in an earlier point, it never hurts to have influences and inspirations, as in any line of business or creative ambition. But to make your work really worth reading, it has to come from you personally. And that means developing for yourself a unique writing voice. A lot of my readers have said to me that, when reading the Berylford books, they heard my voice as they read the words. That’s not only a massive compliment; that means that my writing voice, my vocabulary and style, successfully came out. And that’s what you want to aim to achieve when writing your first novel.