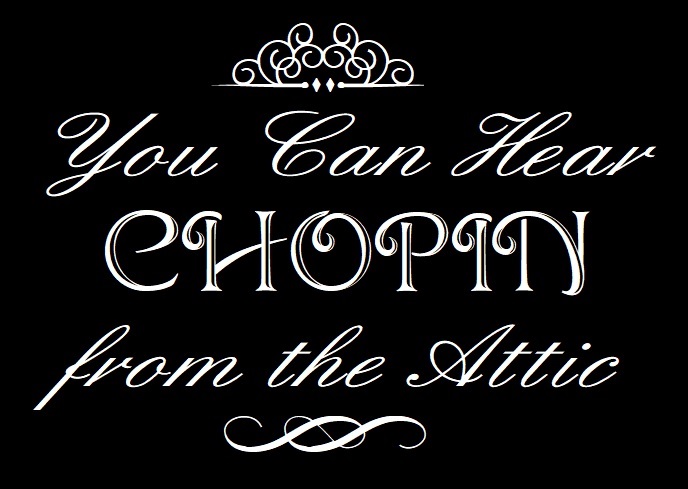 It’s been a while since we discussed the wartime thriller. So let’s bring you all up to speed…!

Too often on this blog do I seem to be saying, “It’s been a while!” Apologies — been gone a few months. Needed a bit of a break from the fiction side of things while things picked up on the journalism side. Sales of Sin & Secrecy have been disappointing, to put not too fine a point on it — I’m putting that down to people being careful with money due to the pandemic. And also, I started a Masters in Creative Writing & Publishing at Bournemouth University, which has been taking up my time too. More on that if you’d care to hear it, but in a future post. This update is to be dedicated to my latest major project, You Can Hear Chopin from the Attic.

The last in-depth update I issued about this project was back in January 2019. And the main reason that nothing noteworthy happened to it in all that time is that I ended up revising and publishing Sin & Secrecy instead. It was always my plan to come back to it, and now, after a hiatus of nearly six months, I finally got back into it last weekend.

WHAT IS YOU CAN HEAR CHOPIN FROM THE ATTIC ABOUT?

In a departure from the settings explored in The Berylford Scandals, i.e. Regency period England, this new novel, You Can Hear Chopin from the Attic transports us to Berlin in 1943. Most of the action is set at the Heinrichsturme Hotel, one of the last luxury establishments in the city neither doubling as a hospital or a barracks, nor blown apart by bombs. The story follows Heinrich Oeunhausen, the precocious young manager of the hotel, whose duties are divided between keeping his guests satisfied, his business operational, and his staff safe. All of these are impeded by the presence of a gaggle of SS officers and other Nazi Party members, led by the formidable Standartenführer Leopold Upfauer.

Heinrich is pressured to join the Party himself, but is reluctant to do so for a number of reasons, not least because his young wife Sofie is mentally ill and a target of the Nazis. For her protection, he has her shut away within the hotel, her condition placated only by music provided by Itzhak Zylberman, an elderly Jewish musician who must play endlessly for the sake of his life. As if all these secrets weren’t enough, Heinrich’s latest trouble comes in the form of glamorous and impetuous journalist Cordelia Knesebeck, whose snooping quickly risks exposing everything he has set out to hide. But she has an agenda of her own, and soon enough, one is forced to help the other, with no shortage of casualties along the way.

Originally the idea came in a dream – literally the image of a pair of people climbing up to an attic, where they find an old man playing Chopin on the piano – specifically the Nocturne in G Major (one of my favourites). That slowly developed the more I thought about it into a story of false imprisonment – I don’t know when that all warped into the wartime thriller it has become now. Some of you may think there’s a parallel there with Roman Polanski’s The Pianist, the story of classical musician Władysław Szpilman. The story is a light inspiration, admittedly, but my Itzhak Zylberman will be an entirely different kind of character in the grand scheme of things.

The hotel setting is partly down to familiarity, as I have spent a lot of my working life in such establishments, so there are plenty of experiences to draw from. Both dramatic and comedic (there will be some light moments in this novel or it’s going to be awfully heavy). The decision was also made from an intellectual perspective — how hotels in Germany ran during the war is a largely unexplored topic (in fiction, anyway). As such, it will be fun to research.

Meanwhile, the characters’ appearances, personalities, and interrelationships are partly inspired by the people I was closest to at the time — my friends and colleagues from my days working at Nationwide Building Society.

Want to know more? Let me know if you want a Chapter Preview or a Character Profile for the next post about You Can Hear Chopin from the Attic. Why not let me know in the comments? For more author news and views, my Facebook, Twitter and Instagram pages are here.