Behind the Writing: “A Modern Wasteland” (Part IV)

One more time now — looking behind the writing at the poem I wrote most recently: A Modern Wasteland…

It has honestly been such fun exploring this poem these last few weeks. Definitely going to try to do more poetry, in and around my other writing projects, in the future. But for now, let’s finish off with A Modern Wasteland‘s fourth and final chapter. Titled with my personal favourite line of the four used from The Sermon on the Mount: …AND TURN AGAIN AND REND YOU.

IV. AND TURN AGAIN AND REND YOU

To my little estate I now retire

My sitting-room, my settee

Supine upon this couch I now expire

And muse on how I got here.

They all tell me not to dwell on past failures.

Impossible when all you see around you,

The endless visits from the Duvaliers,

The cards and biscuits – they’re all that’s left

Meanwhile, she’s out there somewhere – the victor with the spoils.

Her crimes were more on par with those of Marion Crane

Than with those of Lady Dedlock.

And yet ‘twas I who was dubbed profane.

A spectral voice inquires, “Could you forgive her?”

“Forgive her? Forgive me!” I realise I’m being an disgracious host.

“Has anyone offered you tea?”

They sit and stare – have I become the ghost?

And thus on reality I have an ever-loosening hold,

Lost in this mire of melancholy.

I resolve to sit here in my turban,

My monocle and my cigarette in a holder

And languish here for years uncertain

It was here that I was really inspired to expand upon the whole poem and turn it into a prose narrative. Oddly enough, the only line where I had to cop out — for lack of a rhyme for “failures” — sealed the deal. That will hopefully settle any queries that anyone has about what I meant by “the Duvaliers”. When I eventually get around to turning the whole Modern Wasteland into a prose piece, the Duvaliers will serve as supporting characters, as will Sir Jack and Mr Gibson (named after two of my best friends – just the latest in a series of allusions I like to include).

Who can pick out the cultural references in this stanza? And what they might mean? Well, for those still unsure, it’s a comparison between Marion Crane, from Robert Bloch’s Psycho (or more specifically Alfred Hitchcock’s adaptation thereof where she was played by Janet Leigh), and Lady Honoria Dedlock from Dickens’ Bleak House. Last week, you saw the narrator decide to let go of his failing marriage. Now we learn that, rather than sleep with men she wasn’t married to (as Lady Dedlock did), she embezzled money, as Crane did. Now riddled with grief and almost catatonic with depression, our narrator falls in and out of full consciousness, only partly aware of the visitors who show him support.

And that’s that! Thank you all as ever for your support. More updates and side-projects to come in the new year.

HAIR COLOUR: Dark (as a young woman); Silver-grey (as an older woman) 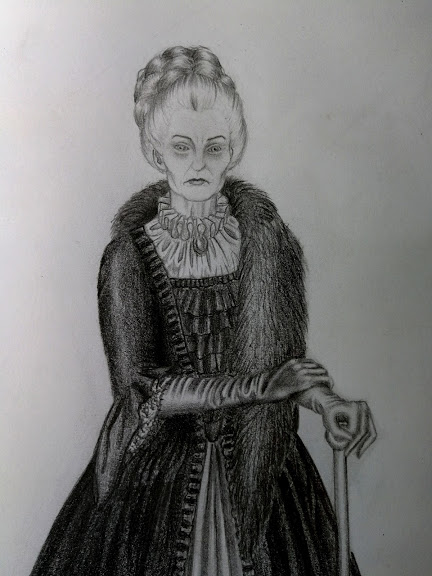 The heroine (or arguably the anti-heroine) of the first Berylford Scandal is Oliviera, the Countess of Vyrrington. It is the downfall of her character described in the events of Lust & Liberty. And in the upcoming sequel, Sin & Secrecy, we see her living in the shell of her former life. In this second story, where we see her approaching her sixties, I decided to make Lady Vyrrington an almost ghostly character. I thought it suitable; she is a ghost in the sense that the woman we read about in the first book is all but gone.

While still a major character and mentioned before this (particularly when her cousin Rebecca Stirkwhistle asks her brother Abel, “…how is the old slut?” she does not appear in Sin & Secrecy until the fifth chapter. See if you can get the feeling of how much she has changed from the description below:

from Chapter V of The Berylford Scandals: Sin & Secrecy

“…She was a shimmering and spectral display of silver and black. From her face, powdered almost ghostly white, the towering grey coiffure of hair still streaked with their former ebony shades, to her long hands and slender fingers, gloved in black kidskin. She was clad in a dark, billowing gown and thick black pelts that glinted in the lamplight were astride her shoulders. A white lace collar and a silver medallion were clasped at her throat, in danger of strangling. The great lady was Oliviera, the Countess of Vyrrington. She was the Stirkwhistles’ second cousin and the Lady of Beryl Court. All rents, taxes and yields from the properties and businesses in Berylford were reported directly to her, in the absence of a definitive Lord Vyrrington.

The rhythmic and steadfast clack of her high-heeled boots and walking cane announced her presence, as did her once beauteous countenance, now rendered hollow, bitter and frozen after decades of grief, woe and misery. For now she was encumbered by neither love, mercy, warmth or affection, save for a very small number of individuals. The Countess had lost her children: five were dead and her two sons, who were in the army, had long since relinquished any contact or acquaintance. She had a granddaughter; the one person for whom her heart still beat warm and loving, though she saw her very seldom while she was at school abroad. She had also lost her husband, and more besides.

All her anguish and despair had manacled her to a permanent state of lamentation, mixed with ill-tempered and ironclad Conservatism and religiosity. Her regard and love for humanity, in which she had held no account for class or financial status, were all but spent. Now she cloistered her attentions on the few who remained dear to her. For the rest, her duty she had long deemed irrelevant…”

Lady Vyrrington was originally envisaged as a selfish and snobbish old woman back in 2008, as one of the original 40 characters I created. Her maiden name was always Isaacs, but her surname underwent several changes. Barrington, Berrington and Verrington were earlier versions. It was never going to be a run-of-the-mill surname — where is the memorability in that?

Even ten years ago in the original story, she didn’t care very much for her butler Whitlocke. But it was an issue I felt I needed to address — why did this mistress and butler hate each other so openly? That was one of the catalysts for writing Lust & Liberty – to answer this question, along with many others. And it was necessary therefore to show Lady Vyrrington as a much younger woman. The events that turned her into this icy, bitter, miserable woman followed.

While her younger self isn’t really inspired by any other literary characters, the older Lady Vyrrington, however, is a different story! Primarily, she was based on the invalid Mrs. Clennam from Charles Dickens’ Little Dorrit. Not just in terms of the cold demeanour, either. Her ambivalent relationship with Whitlocke is comparable to Mrs. Clennam’s with her manservant and business partner Jeremiah Flintwinch. In addition to Mrs Clennam, Lady Dedlock from Bleak House and Elizabeth Gaskell’s Lady Ludlow also played their parts in fleshing out Lady Vyrrington’s character.