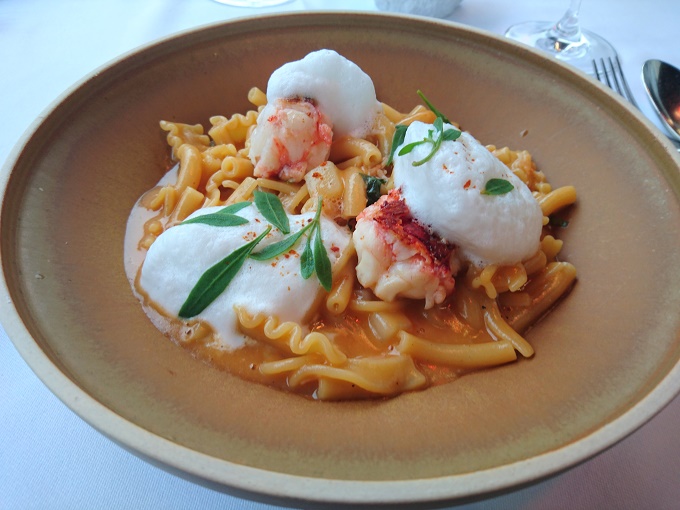 Reminiscing on an amazing and extravagant opportunity I had a few years ago. One that took me to a prestigious restaurant on the edge of Hyde Park. Called Osteria 60…

As many of you know, I have plied my trade as a journalist here and there. In many ways, not so successfully. But I am proud of the two long-running projects I’ve been involved with over the years. My current editorial position at Humans of Bournemouth keeps me busy, while I made the difficult decision to abandon my first brainchild Expensive Tastes earlier this year, for financial reasons. Because closing time is only a couple of weeks away, I have been trying to salvage some of my favourite memories from running Expensive Tastes for the last seven years. One of them – THE favourite of them all – took me to very posh surroundings on a man-date with an old friend. A restaurant in Kensington called Osteria 60.

Context first. This review is particularly important in my career since it’s the only one I was actually commissioned to write. A friend of a friend and a hospitality PR company got in touch offering me and a friend a three-course meal at Osteria 60 on the edge of Hyde Park. All I had to do was publish an honest review on the blog. The meal, which came to over £150, was complimentary. Gorgeous food too, as you will find out.

To add a differing opinion (and some comic relief), I got my old uni friend and former radio co-presenter Dean Connor involved. The restaurant loved the review (where it still sits on their website, despite it now trading under a different name) and the PR company wanted us to do more. However, when I asked about the next opportunity, I was told they had gone into liquidation. Typical. Anyway, here’s the review — edited just a little…

It takes a good hour to get to Kensington from Waterloo – after scaling the Strand, meandering through Mayfair and enjoying what Hyde Park has to offer on a reasonably sunny day, you reach it quite suddenly. Indeed, Dean and I were aiming for the upscale Italian restaurant Osteria 60 – we found it when exiting Kensington Gardens. Had I not had a hawkish eye for place names, we probably would not have noticed it! Suffice it to say, it was not too ostentatious from the front, though its understated exterior is more-than-compensated with its lavish, golden interior.

An Osteria (pronounced with the stress on the second-to-last syllable) is, according to our waiter, a combination of a pub and a wine shop – the closest thing in English to call it would be a wine lodge. The “60” came from the address on Hyde Park Gate.

The weather was suitable enough to allow us al fresco dining, the space for which on their front patio is considerable, with tables of varying sizes for those there for just a coffee and a cigarette to those like us who were there for the full three-course treatment.

As with any restaurant of its calibre, the à la carte menu is decently varied to leave you pondering for a few minutes over which dish you would rather have, without giving you reams and reams to read through. A couple that caught my eye on the starters were the buttermilk and smoked cucumber gazpacho with wild garlic; Osteria 60 calamari with tomato pappa and mozzarella, and smoked heritage beetroots with buffalo ricotta. These are all well and good, but not when faced with the 28-day aged steak tartare with roasted shallot mayonnaise and caviar. Ossetra caviar, to be exact. Dean’s choice, on the other hand, was a warm summer minestrone with a basil cracker. 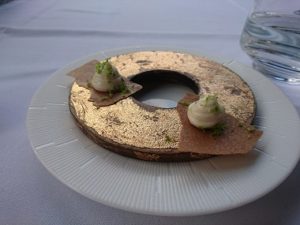 Whilst waiting for the chefs, headed by the noted chef Ivan Simeoli, to work their magic in the kitchen in creating these starters, we were given a couple of unexpected temptations for our mouths. The amuse-bouches consisted of a dainty almond cracker with black truffle mayonnaise and lemon zest, as our waiter informed us. Antolino, his name was, became our good friend over the course of the meal, and impressed us intensely with his knowledge of the ins-and-outs of the dishes he served, the place he worked for, and the senses of humour of his customers – especially when advising Dean not to eat the ring on which the amuse-bouches were served. These are three qualities that, in four years of restaurant critique, I have sadly found to be a major rarity.

Our appetisers, to which neither I or Dean could give specific description in terms of flavour, other than the incredibly prominent creaminess in texture and dominance of the black truffle mayonnaise, were not the only things served to keep our mouths occupied. Some hand-baked sourdough bread followed, only just preceding the arrival of our starters, still warm from the oven and remarkably easy to pull apart. It came with butter softened by adding double cream, rather than simply heated. 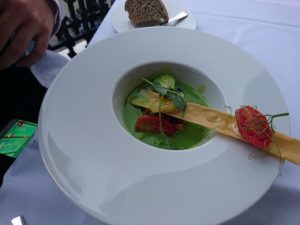 My steak tartare arrived shortly after the bread, elegantly poised beneath a translucent sesame crisp, jewelled at the edges with tiny black pools of caviar, amidst a moat of crimson shallots and mayonnaise. Dean’s soup followed, served in front of him in what can only be described as a glass teapot. One normally pictures reddish-brown when thinking of Minestrone soup, but this was bright green, contrasted well against the bulbous and juicy tomatoes that balanced on the single oblong basil cracker like an Olympic diver. The intense savouriness of the basil cracker against the subtle sweetness of the soup gave the perfect contrast, and both Dean and I were overwhelmed by how nice the tomatoes were. 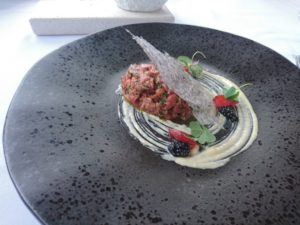 As my dish goes, the sesame crisp could be compared (sacrilegious as it may sound) to the commonplace prawn cracker when it comes to texture, not necessarily flavour. There was less of a saltiness about it compared to the Chinese shop freebie. The steak tartare itself however was surprisingly flavoursome and tasty. Anyone who knows their food knows that steak tartare is a risky business to cook and even more so to eat, given that the meat has only just stopped mooing. From the taste of Osteria’s, however, one wouldn’t know any different. It felt cooked and tasted cooked. After all, I’m here to tell the tale! While the meat on its own did not have all that much seasoning, the shallot mayonnaise and, of course, the caviar compensated it vastly. And for a portion of its size, it was remarkably quite satisfying as a starter.

With a menu sporting the likes of a dish of Welsh Wagyu Beef for £75, it’s easy how one might draw conclusions about Osteria 60 before trying. It was the only thing on the menu the PR company had prohibited us from having off the menu. As such, mine and Dean’s entrées were the second-most expensive items. For Dean, the Welsh Lamb Côtelette with Sicilian aubergine caponata, accompanied by the house merlot. For myself: lobster, potato and chilli maltagliati, paired with a glass of the house sauvignon blanc. 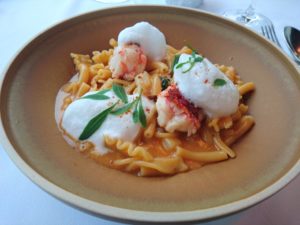 Once again, we found Antolino to be a fountain of knowledge – maltagliati loosely means “not cut properly”, and as such the pasta came in all shapes and sizes. The lobster meat was minimal, as I had been expecting – a couple of nevertheless-large chunks, amidst a very creamy and slightly spicy sauce, the spice that came from the chilli. As with my starter, however, surprising though it may be, I was happy to say the dish filled me up, though not enough to call dessert off. 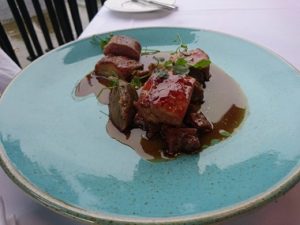 “Melt in the mouth” would be an understated description of what Dean’s lamb did, however; “dissolve” would be a more accurate way of putting it. Armed with a sauce of the utmost deliciousness, I actually think I envied my friend for his choice of main – on his plate was something only just short of perfection — in his self-proclaimed representation of “the common folk”, he could have done with a portion four times as big. 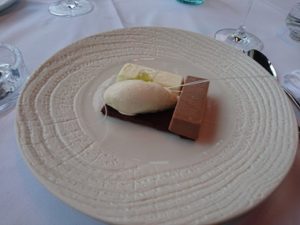 When discussing dessert, here I address all art lovers, or at least those who are familiar with the work of Dutchman Piet Mondrian. He was in the National Curriculum when I was at school, and my choice of pudding – the Chocolate Mondrian – is inspired by his work. His art comprised of rectangles, utilising only five colours – red, yellow, blue, white and black. Naturally chocolate is only comprised of three, and all appear here.

For any actively-practising chocoholic, such as myself, this dish ticks all boxes present, and Antolino was only too happy to talk me through the structure bit-by-bit. At the bottom starts a thin layer of chocolate sponge cake, topped with an even thinner layer of solid chilli chocolate. Resting on it are two oblongs of semifreddo – one of white chocolate, the other praline. A scoop of chef’s homemade vanilla ice cream cushions a twist of melted glucose, in which a bubble has been made to house a drop of extra virgin olive oil.

The art is in the execution, and you have to eat the olive oil at the same time as the ice cream to get the full effect of the combined flavours. Though no one in their right mind would think these two things would work before trying it, astoundingly it adds to that ever-growing list of weird-yet-wonderful combinations. I can only urge you to try it for yourselves; it’s truly an experience that will cause you to re-evaluate your perceptions of food and food pairings. 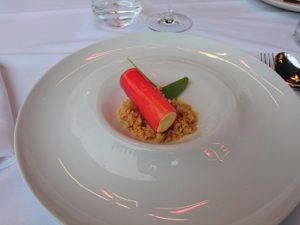 There was a bit of a story behind Dean’s choice of dessert too – the Negroni Cheesecake, named after and based on the Negroni cocktail. In describing the biscuit base, Antolino could just as easily have recommended a KFC recipe, as it consists of a crumble flavoured with herbs and spices. The cheesecake, of which there is a thin cylinder, is encased in a bitter Campari jelly, and in doing so playing the two polar-opposite flavours against each other. A very clever idea. 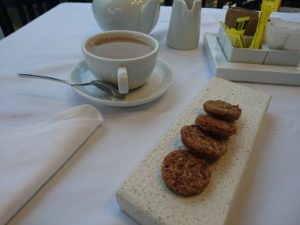 So what’s left? A hot drink to finish. I did not partake, but Dean went down the quintessential English route and ordered a pot of Earl Grey tea with a splash of milk. While one can’t go wrong in that regard, it was the accompanying biscuits that tantalised our taste buds that extra step further.

One thinks Italian restaurant, of course one expects Amaretti biscuits to come with the coffees or whatever. Once again, Osteria 60 challenges our expectations and presents a quartet of mouthful-sized oat biscuits, sweet and tasty, to a point where we wished they had brought more. Certainly less of an acquired taste than an Amaretti biscuit.

No polite words can be used to describe how this restaurant’s initiative and ingenuity with a cuisine that usually follows a “seen one, seen them all” approach have astounded me. It challenged every expectation and perception I had of Italian cooking. I cannot fault the service in any way, nor can I find any criticisms for neither the presentation nor the variety, nor the quality.