“One for the Scholars” — Allusions, Inside Jokes and Easter Eggs in Literature 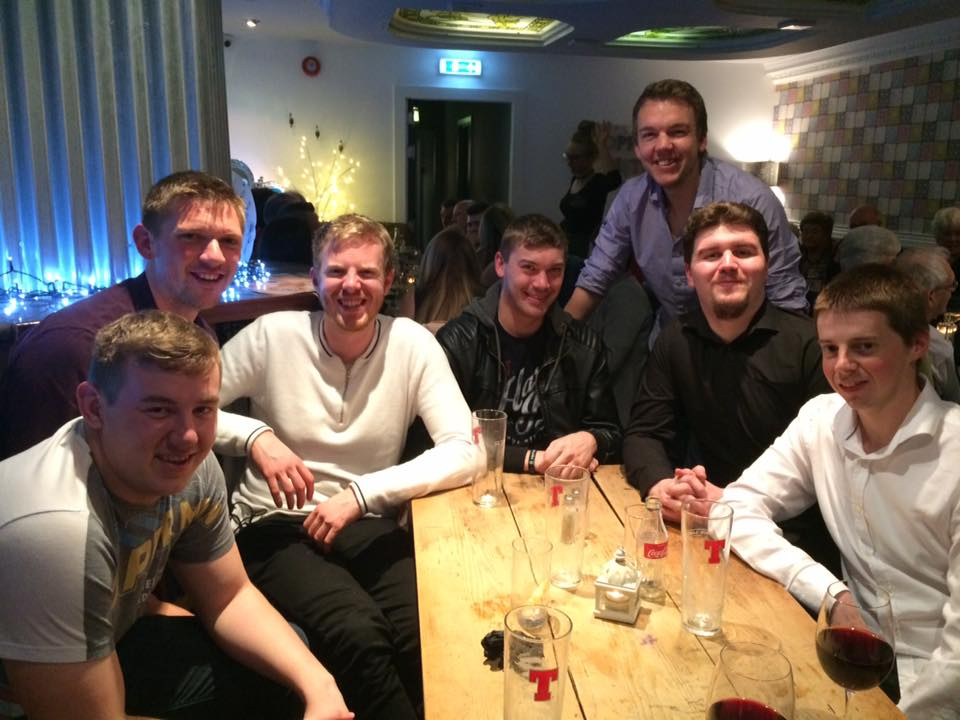 “One for the scholars”, a phrase that will appear in Sin & Secrecy, is in fact a passing tribute to a group of old friends of mine, many of whom are pictured here.

As I do my last wave of final checks on the new book, I’ve been taking the time to chuck in a few hidden extras. A little bit of fun for those who know what to look for…

People like stories with messages behind them. I personally enjoy ones that aren’t necessarily there to teach a lesson or to represent the author’s inner feelings (we had a few examples of those in a post earlier in the month), but instead offer subtle allusions and homages to other work, or have inside jokes for the analytical readers to smoke out.

The upcoming second instalment to The Berylford Scandals series – Sin & Secrecy – has a couple of such Easter Eggs in it, including use of the phrase, “One for the scholars” – a little tribute to some very good old friends of mine, to whom the book is dedicated. In addition, I have drawn intentional parallels between the family of Abel Stirkwhistle and my own – in that Abel has one sister and nine first cousins, same as me (though I like to think we’re a lot nicer bunch of people!) I’ve also thrown in a couple of subtle references to Bleak House, A Christmas Carol, Shakespeare’s Richard III and Poe’s The Raven – if you plan on buying the book, I’d love to see if you can find them!

There are very few deliberate allusions to speak of in Lust & Liberty beyond the full name of the main setting – Berylford St. Barbara, and its pub, The St. Barbara’s Arms. These, of course, are passing tribute to my grandmother. A little homage to one of my favourite short stories, The Snow Child by Angela Carter makes its way in there, and scenes towards the end and the fate of the one of the characters is partly inspired by Puccini’s opera Tosca.

But surely I’m not the only one who does this. Of course not! Here are a few allusions, inside jokes and Easter Eggs that made their way into some famous works of literature.

At the end of Through the Looking-Glass, the sequel to Alice’s Adventures in Wonderland, Lewis Carroll included an acrostic poem entitled A boat beneath a starry sky. The acrostic spells out Alice Pleasance Liddell, the girl after whom Carroll’s Alice was named. Carroll’s relationship with Liddell, whom he knew when she was a child, is the subject of some mystery and controversy – a lot of which considers the idea that Carroll had a paedophilic infatuation to Alice and her sisters. The Liddell family’s friendship with Carroll did come to an end in 1863 and the reasons for the rift have been left unexplained. One for the scholars, I think…

J.R.R. Tolkien was a great lover of words and language as is fairly common knowledge. Hence the numerous ones he constructed himself for his Middle Earth legendarium. But the languages and the writing systems he designed offer more than the authentic feel of being transported to another world. They also made their way into a little Easter Egg on the original title page of The Fellowship of the Ring. Some hardcore fans made it their business to know what the pretty writing actually says, and translated it as follows: “The Lord of the Rings translated from the Red Book of Westmarch by John Ronald Reuel Tolkien. Herein is set forth the history of the War of the Ring and the Return of the King as seen by the Hobbits.”

3. It Leads to Misery

Any Stephen King fans out there? Eagle-eyed ones among you might have sniffed out the link between two of his most famous stories — It, published in 1986, and Misery, which came out the following year. One of the children tormented by Pennywise in It just happens to be the next-door neighbour to the family of Paul Sheldon, the unfortunate protagonist of Misery.

Evelyn Waugh’s work often featured characters named Cruttwell – never the exact same one, though they are always absurd or dishonest. And this is a scathing back-handed tribute to his old tutor at Hertford College, Oxford — C.R.M.F. Cruttwell. The characters continued to appear in Waugh’s work until the real-life Cruttwell’s late-life mental illness and subsequent death.

Kingsley Amis did a similar thing with his work, in which featured characters called Caton. They were named after Amis’ publisher R.A. Caton, and again this was done as more of a mild revenge than as a compliment. Amis believed that his first book of poetry, which Caton published, was not promoted properly. The character Caton in Amis’ 1966 novel The Anti-Death League dies in the novel, and the name does not appear thereafter.

Got any other examples of allusions, Easter Eggs and inside jokes you’ve found in your favourite books? Why not let me know in the comments? For more author news and views, my Facebook, Twitter and Instagram pages are here.