Behind the Writing: “The Platform”

Getting into the details of my latest poem, The Platform. Written in light of Mental Health Awareness Week…

As I stated in my last blog post, I’m going to make myself more of a presence on YouTube (and I would appreciate any subscriptions going). And for my first proper video, I thought it was appropriate to address Mental Health Awareness Week, which ends today. You can view the video separately, so I won’t reiterate the message contained therein. I will, however, take this opportunity to go into a bit of detail about the poem that follows it. Written especially, after years of sitting on the idea, I am happy to present The Platform.

The Poem in Detail

In a pre-COVID world, I used to travel by train a lot. And, while I can’t remember precisely when, I once had a thought, while waiting at Branksome railway station, that people have and do attempt and indeed commit suicide, simply by stepping off a platform. An awful thing to imagine, of course. But it sparked the idea for a drama, in which seven people, for their own respective reasons, have all come down to the same railway platform to commit suicide. In the drama, which was going to be titled The Platform, none of the seven people would get to kill themselves, because an eighth, unseen person manages it. However, the experience is sobering for the other seven, who actually come together as a unit. Fulfilling needs in one another that they had been lacking alone.

Obviously this idea remained dormant for years, until I was thinking about Mental Health Awareness Week. And how I’d like to write a poem whose stanzas could be read in any order. One that didn’t follow the traditional vertical format. Lo and behold, The Platform resurfaced. And while it could just as well serve as the basis for the drama it was meant to be in future, I think it works just as well as a poem. With each stanza representing a person standing on the titular train platform.

I prefer to let people interpret the inner meanings behind each stanza. Who each person is and what their vulnerabilities are. Are they tales of loneliness, social anxiety, and bog standard depression? Or do they touch more on the ideas of autism, blindness, and racism? I’d like to let you join the dots for yourselves — why not post in the Comments section what you think each person represents or suffers from.

However, the final stanza, deliberately placed in the traditional position, is hardly ambiguous. One step down (off the platform) leads them to freedom. And pain for those who know and love them.

Behind the Writing: "A Modern Wasteland" (Part II)

Behind the Writing: "A Modern Wasteland" (Part III) 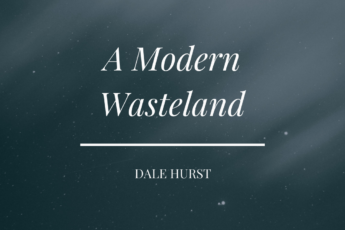 Behind the Writing: "A Modern Wasteland"

« Previous post
5 Things to Know When Getting Author Headshots
Next post »
You Can Hear Chopin from the Attic: In Food