Photo by rawpixel.com on Pexels.com

I was recently asked if it took me a long time to write the three scenes that feature in The Berylford Scandals: Lust & Liberty. In truth, it took me longer to decide whether they were necessary in the first place. Could I pull off a half-decent romantic mystery novel without giving a graphic illustration of my anti-heroine Lady Vyrrington’s sexual encounters? Ultimately, I decided that, yes, they would be. The writing of the scenes themselves only took a day each, or so.

The best way, in my opinion, to learn how to write a sex scene suitable to the style and tone you’re going for in your own work, is to read how it’s done in books of similar genre. This gives the best idea of how to work the language to sound good and illustrate what is happening without putting off the more prudish reader.

Ken Follett, author of Pillars of the Earth and A Dangerous Fortune (among others) is my key influence in this regard. Sex scenes are a common occurrence in his novels, and in many instances, he doesn’t beat about the bush.

Then there’s Angela Carter, who wrote The Bloody Chamber, an anthology of short stories, one of which is entitled The Snow Child, which ends with a Count having sex with the corpse of a girl his wife has just murdered. The words “thrust his virile member” carry a certain memorable quality and poetic gravitas, yet retain their graphic nature.

I would recommend against using EL James as an influence for sex scene writing, not least because it’s lazy but also her literary skill has divided opinions. And having read the first Fifty Shades book, I don’t hold her skills as a writer in high regard. However, her scenes may serve as a starting point on which you can build and improve.

Only use sexual slang if you are describing the scene in dialogue. Obviously, if it’s a first-person narrator, the rules are slightly more flexible. But otherwise, “thrust his virile member“, regardless of the genre and style of your writing, is going to appeal to the reader more than “shoved his cock in“. Unless, of course, you are deliberately satirising, in which case there are different rules altogether.

If you have any further questions on writing sex scenes in fiction, please leave them in the comments and I’ll do my best to answer them. 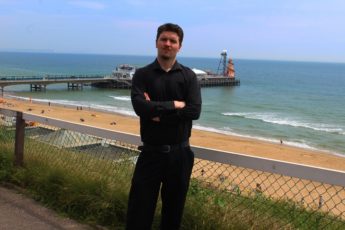