The first sample of the new book went down pretty well, so how about another? Featuring a familiar name…

I love hearing from readers and fans alike. Whether that’s on Facebook, Twitter or Instagram. One particularly positive series of messages came to me via Twitter, praising the samples from the latest Berylford Scandal, Sin & Secrecy. Such as the one featured in the profile of our villainess Rebecca Stirkwhistle. Or, indeed, the snippet from Chapter I.

For this next preview, taken from Chapter VI of the new book, we stick with Rebecca. It also features the main anti-heroine from Lust & Liberty. Lady Vyrrington, of course. The scene in the extract below is a tense conversation between the two women. It might make more sense if you’ve read the first book, but I’ve tried to word it so that Berylford newcomers will get the gist… 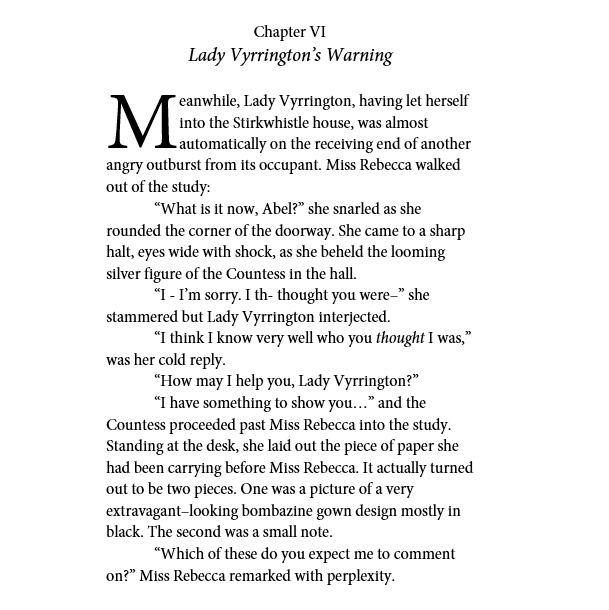 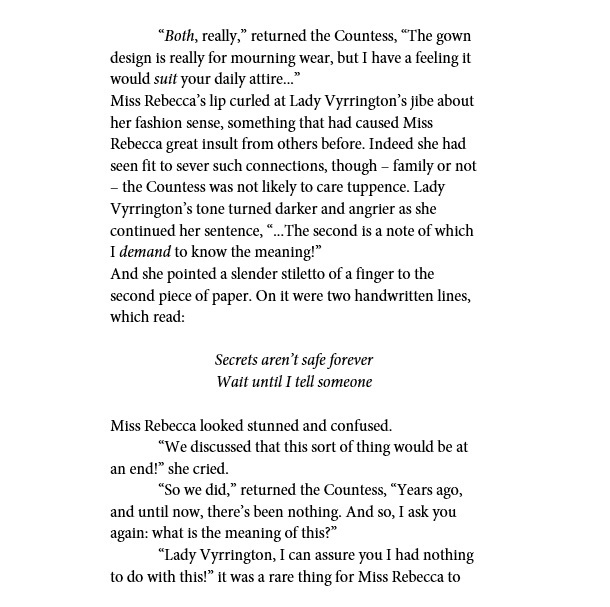 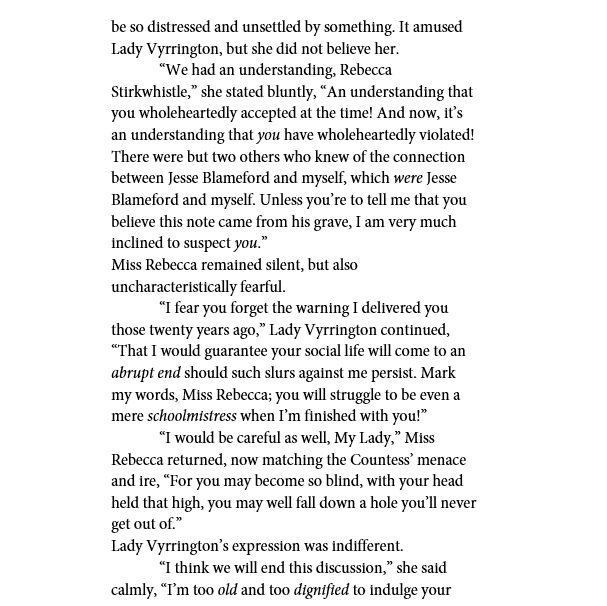 Again, apologies for the gapping…

Hope that was a decent read and that you will want to see more in future. Get up to speed with The Berylford Scandals by purchasing Lust & Liberty on Amazon here. And like or follow us on social media so you never miss a post in future!

ALLIES: None (actually one, but that would be a MAJOR spoiler!)

If Lady Vyrrington and Abel Stirkwhistle are anti-heroes, Miss Rebecca Stirkwhistle is definitely a villain. She is a primary antagonist to both characters at stages of Lust & Liberty and, spoiler alert, in the upcoming sequel, Sin & Secrecy. Without giving too much away, she becomes central to the events of the early chapters of S&S, which serve as a catalyst for the rest of the novel.

While I try to inject redeeming qualities into Abel and Lady Vyrrington’s characters, Miss Rebecca remains totally evil. Her sole purpose is to squash any pleasure in the lives of her brother or her students at the schoolhouse. She does, however, know when to quit with some people. In Lust & Liberty, she crosses Lady Vyrrington, for example, and comes out the loser. From here on in, she bides her time, recognising that she is the weaker of the two combatants. With Abel, at whose hands she has suffered before, Miss Rebecca remains more defiant and stubborn, however.

The below excerpt should hopefully illustrate her character to a degree:

from Chapter I of The Berylford Scandals: Sin & Secrecy

“…While Abel Stirkwhistle could be cruel for his own amusement, the malice and draconian evil of his younger sister Miss Rebecca was on account of pure and uncompromising hatred for all humanity. Her brow was constantly furrowed, her eyes glaring hawkishly at whomever she should behold. Her lips were thin, well-wrinkled and permanently warped into a scowl. The ugly consequences of uttering such nastiness, such malevolence and spite. She was a tyrant taking the guise of a spindly, angular, bespectacled harridan. And she embodied the role as if it were her God-given duty. Her chief enemy, however, was her brother, whom she had never forgiven for being born a man, nor for being born first. And more besides…”

Rebecca, whose name was originally spelt true to its Biblical origins — Rebeccah — was the second character invented for the Berylford “universe”. And she was always an antagonist for her brother, Abel. Some of the scenes in the opening chapters of Sin & Secrecy have been there since day one. I love writing their fight scenes, because they can say some truly nasty things to one another — quite unlike any other brother and sister relationship in literature. I think even Cersei and Tyrion Lannister have more affection between them!

The acrimonious relationship between the two siblings was in part inspired by my own similar love-hate relationship with my own sister, though obviously exaggerated to a massive, violent degree. There are also elements of my former enmity with schoolmate and fellow writer Dale Hall injected in there. Not to mention every nasty female teacher I had in school. I think it’s easy to create a truly hateful character by only taking the absolute worst bits from real-life influences and putting them all into one person.

Unlike Abel and Lady Vyrrington, I did not really base Rebecca on any famous literary characters. She is based more on people I have known in real life. However, if I were to name a character who I think she resembles, I would say Fanny Dashwood from Jane Austen’s Sense & Sensibility. Both are bullies, full of spite and self-absorption, with no real regard for anyone’s happiness other than their own.

What do you think? Does Miss Rebecca remind you of anyone, either from real life or in another novel? Let us know in the comments!