I recently interviewed Rob Holmes, founder of something called The Collaborators Cabin, as part of my content creation service for my client Humans of Bournemouth. He’s actually a friend of my cousin, Sean, who introduced us and, leading up to the interview, I was invited to visit the Cabin for a writing “session”.

It’s actually run a bit like a writer’s course like one I attended at the Arts University way back when. But, in a way, I appreciate that. After studying journalism and broadcasting for three years, there’s a lot about narrative fictional prose that I have actually forgotten about. Eight years writing and completing a book notwithstanding…

In attending these weekly sessions, I have actually developed two other ideas that I intend to continue work on alongside my latest novel, the wartime thriller You Can Hear Chopin from the Attic.

One is a psychological horror-thriller story, written in the first person, which is an oddity in itself bearing in mind I can’t usually stand first person fiction. Reminds me too much of studying Michael Mopurgo at school, under a favouritist, snobbish and self-serving teacher with not much appreciation for literature. Don’t get me wrong — Mopurgo’s a master at what he does — but it’s not how I usually like to write.

The other is another stray out of my comfort zone into the realms of fantasy. My liking for fantasy and sci-fi extend to Star Wars and Game of Thrones. And that’s more for their cinematic and televisual cultural impact than obsessing over the finer details of their stories as some people are known to do. But in these sessions, I find I actually enjoy writing the story I have come up with.

In the next couple of posts, I am going to release previews from both of these stories and allow you, the potential readers, to decide which of the two I work on alongside my main project.

Be on the lookout… 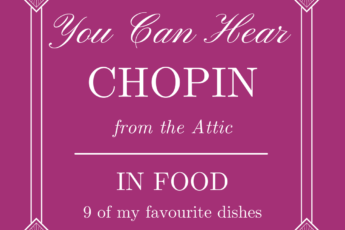 You Can Hear Chopin from the Attic: In Food